We have enjoyed a string of beautiful, warm days here in Zone 5. Plants are popping out of the ground. Here are a few that are up:

This is Maral Root, Leuzea carthamoides 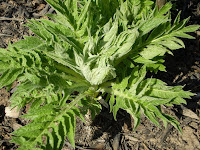 This is Pasque Flower (Anemone pulsatilla) 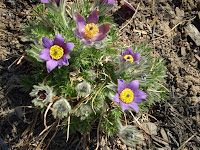 And here is a Double-flowered bloodroot I just bought at Well Sweep Herb Farm in NJ: 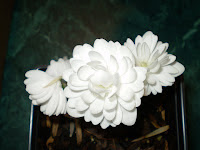 I will be adding it to the patch of single bloodroot I have established in the woodland area of the garden.

There are lots more showing their faces: sweet violet is blooming in the south facing beds, trillium leaves are up, hepatica is up and lily of the valleys are just pushing up through the earth. Dong quai (Angelica sinensis polymorpha) is there, as is Korean angelica, Dahurica angelica and angelica archangelica. True French sorrel and bloody dock are about 4 inches high. Catnip and lemon catnip are starting to grow again. Comfrey (Russian, white, yellow and "regular") are saying hello. Lovage, tarragon, coneflower, sages, licorice, osha, monarda, etc. are all happy and welcoming spring. There are lots, lots more and I'm like a 3-year-old clapping my hands every time an herb shows up again. There is true joy in gardening.
Posted by Betty at 1:09 PM 1 comment:

Spring has Sprung or at least the snow has melted 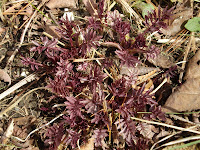 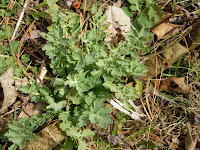 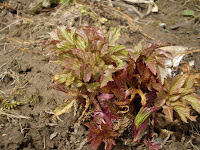 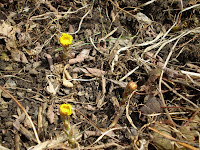 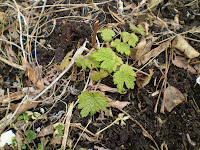 Ahh, finally a few days of warmer temps strung together. 50s and 60s for a few days wakes up plants. I hear from a lot of people that they don't know what herbs look like when they emerge from the ground. So, I've snapped a few pictures of some herbs that are poking up now.

The first picture is Valerian (Valeriana officinalis). The leaves will turn greener as they grow. Valerian root is used as a sleep inducer. The flowers smell of cherry pie. The root smells of feet and butt! What a dichotomy.

The next picture is Celandine (Chelidonium majus). The yellow-orange sap of the plant removes warts. This works pretty well. There's a folk tale that says swallows use the sap to clear the eyes of their newborn chicks. Humans, don't try that! The tree swallows return around here when the celandine starts growing in the spring. Sure enough, I saw the first tree swallow 2 days ago.

The next plant is Angelica (Angelica archangelica). This lovely perennial is good for a number of things, one of which for protection. The candied stems are delicious. Various plant parts are used medicinally.

Coltsfoot (Tussilago farfare) is next and is the first blooming wildflower around here. Coltsfoot is
also known as son-before-the-father because the blooms are first, followed by leaves later. Often, people mistake coltsfoot for dandelion. As the Latin name tells you, coltsfoot is useful for coughs. However, NEVER use coltsfoot without the guidance of a competent herbalist.

Motherwort (Leonurus cardiaca) is the last picture above. A great anxiolytic and useful for some heart problems as well. Again, make sure you have the advice of a competent herbalist before using this.
Posted by Betty at 7:48 AM 5 comments:

A few weeks ago, I got a call from Joanne McFadden, a reporter for the Schenectady Daily Gazette. This is the same reporter who was assigned to do our story on becoming a Botanical Sanctuary. She asked if I knew anything about ginger. Well, a little! Here's the link to the article that came out in today's paper.

I'm off to teach downstate for two days. So glad the snow has finally melted around here!
Posted by Betty at 4:29 AM No comments: